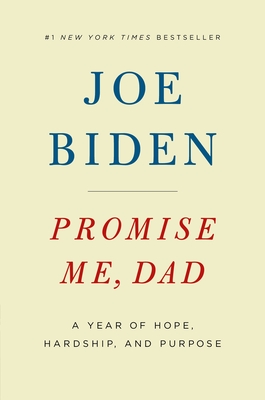 From President-Elect Joe Biden, Promise Me Dad is his deeply moving memoir about the year that would forever change both a family and a country.

“Biden splices a heartbreaking story with an election story and a foreign affairs story. And in so doing, he offers something for everyone, no matter which strand draws you in.”—The New York Times Book Review

In November 2014, thirteen members of the Biden family gathered on Nantucket for Thanksgiving, a tradition they had been celebrating for the past forty years; it was the one constant in what had become a hectic, scrutinized, and overscheduled life. The Thanksgiving holiday was a much-needed respite, a time to connect, a time to reflect on what the year had brought, and what the future might hold. But this year felt different from all those that had come before. Joe and Jill Biden’s eldest son, Beau, had been diagnosed with a malignant brain tumor fifteen months earlier, and his survival was uncertain. “Promise me, Dad,” Beau had told his father. “Give me your word that no matter what happens, you’re going to be all right.” Joe Biden gave him his word.

Promise Me, Dad chronicles the year that followed, which would be the most momentous and challenging in Joe Biden’s extraordinary life and career. As vice president, Biden traveled more than a hundred thousand miles that year, across the world, dealing with crises in Ukraine, Central America, and Iraq. When a call came from New York, or Capitol Hill, or Kyiv, or Baghdad—“Joe, I need your help”—he responded. For twelve months, while Beau fought for and then lost his life, the vice president balanced the twin imperatives of living up to his responsibilities to his country and his responsibilities to his family. And never far away was the insistent and urgent question of whether he should seek the presidency in 2016.

The year brought real triumph and accomplishment, and wrenching pain. But even in the worst times, Biden was able to lean on the strength of his long, deep bonds with his family, on his faith, and on his deepening friendship with the man in the Oval Office, Barack Obama.

This is a book written not just by the president, but by a father, grandfather, friend, and husband. Promise Me, Dad is a story of how family and friendships sustain us and how hope, purpose, and action can guide us through the pain of personal loss into the light of a new future.

Joe Biden represented Delaware for 36 years in the U.S. Senate before serving as 47th Vice President of the United States from 2009 to 2017. As the Vice President, Joe Biden addressed important issues facing the nation and represented America abroad, traveling over 1.2 million miles to more than 50 countries. He convened sessions of the President’s Cabinet, led interagency efforts, and worked with Congress in his fight to raise the living standards of middle class Americans, reduce gun violence, address violence against women, and end cancer as we know it.

Since leaving the White House, Vice President Biden continues his legacy of expanding opportunity for all with the creation of the Biden Foundation, the Penn Biden Center for Diplomacy and Global Engagement at the University of Pennsylvania, and the Biden Domestic Policy Institute at the University of Delaware. He is the author of Promises to Keep: On Life and Politics and the memoir Promise Me, Dad: A Year of Hope, Hardship, and Purpose.

"The book is a backstage drama, honest, raw and rich in detail. People who have lost someone will genuinely take comfort from what he has to say...These flashes of vulnerability are part of what makes Promise Me, Dad memorable; so, too, are the small, tender interactions between Biden and his dying son."
— The New York Times

"Biden splices a heartbreaking story with an election story and a foreign affairs story. And in so doing, he offers something for everyone, no matter which strand draws you in."
— The New York Times Book Review

"Biden exudes humanity throughout the book. He lays bare his emotions and vulnerabilities at losing a son with so much promise."
- NPR